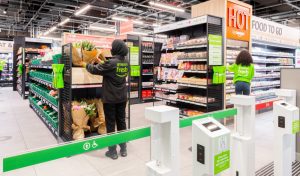 The world’s dominant internet retailer has signaled its intent to do a similar job in the physical world by opening its first shop outside of the US.

Amazon has been dabbling with bricks-and-mortar retail for three years in its home town of Seattle and things seem to have gone well enough for it to make an international move. While the stores were branded Amazon Go in the States, the UK version is called Amazon Fresh, for some reason. Do we get fresher stuff? More likely it’s just to align with the grocery delivery sub-brand.

The big deal about these Amazon stores, whatever they’re called, is that they enable you to buy stuff without having to interact with a cashier, or anyone else for that matter. Amazon calls it ‘just walk out shopping’, to represent that you just grab what you want and then leg it. It uses technology that combines cameras, sensors and AI to keep an eye on you while you walk around the store, thus tracking what you bag in real time and enabling it to automatically bill your Amazon account.

Having to interact with a cashier might seem like a bit of a first world problem but that’s what Amazon is all about. It was never such a massive hassle to go to the shops, but it certainly frees up time not having to. Now residents of Ealing in West London can spare themselves the ordeal of having to physically pay for stuff by visiting the Amazon Fresh shop that opened today.

And Amazon isn’t even stopping there. Not content with decimating the high street and then seeking to replace it, intrepid Ealing shoppers will be offered Amazon’s own food brand, simply called ‘by Amazon’. It’s not clear how, if at all, this will differ from regular grub but presumably it will solve some other first world problem. Maybe robotic arms will just stuff food in your mouth as you walk around, thus freeing your hands for more lovely shopping.