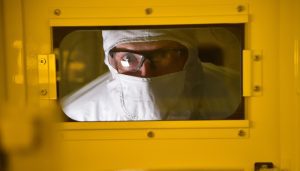 The new CEO of US chip giant Intel has unveiled his turnaround strategy, which includes the creation of Intel Foundry Services.

Pat Gelsinger called his cunning plan IDM 2.0, referring to Intel’s legacy business model as an integrated device manufacturer. In essence this meant it designs and manufactures its own chips, unlike companies like Qualcomm, who get specialist foundries such as TSMC to do the manufacturing for them. Intel is not only getting into the contract chip manufacturing itself, it might even outsource some of its own needs when circumstances demand it.

“We are setting a course for a new era of innovation and product leadership at Intel,” said Gelsinger. “Intel is the only company with the depth and breadth of software, silicon and platforms, packaging, and process with at-scale manufacturing customers can depend on for their next-generation innovations. IDM 2.0 is an elegant strategy that only Intel can deliver – and it’s a winning formula. We will use it to design the best products and manufacture them in the best way possible for every category we compete in.”

To show how all-in Intel is on this new strategy, Gelsinger also announced its will be spending $20 billion on two new fabs at its Ocotillo campus in Arizona. Here’s where the geopolitical sub-plot becomes apparent, with it being clear that the US government dangled some heft carrots to persuade Intel to help solve its strategic semiconductor worries.

“We are excited to be partnering with the state of Arizona and the Biden administration on incentives that spur this type of domestic investment,” said Gelsinger. ‘Intel expects to accelerate capital investments beyond Arizona, and Gelsinger said he plans to announce the next phase of capacity expansions in the U.S., Europe and other global locations within the year,’ said the press release.

Right now far too much of the world’s semiconductor manufacturing is done on China’s doorstep for America’s liking. It seems that, on top of being brutally reminded of its own limitations by the delay of its 7nm process, Intel has felt emboldened to make this major strategic move by reassurances from the US government. So the great tech Balkanisation continues. For further analysis of this move we recommend Stratechery, AnandTech and SemiAccurate.