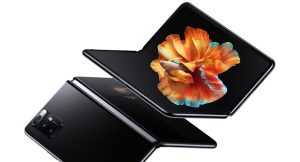 The Mi Mix Fold claims to have the largest smartphone foldable display so far, as well as four speakers and a ‘liquid lens’.

While it’s still hard to see what the point of foldy phones is, Xiaomi deserves credit for putting its back into this one. Of course all flagship phone launches are littered with superlatives, but they seem more justified than usual in this case, which isn’t saying much.

The regular AMOLED display on the outside of the phone is 6.5-inches and, while the quirks of trigonometry mean that when you unfold the phone the resulting internal OLED screen has a diagonal of 8-inches. That is apparently larger than any other foldy phones and, as if that wasn’t enough, we’re told this is also the first smartphone to comes with no less than four speakers.

Apart from the screen, the major differentiator in smartphones these days is often the camera. Here, too, Xiaomi has pushed the boat out. This phone marks the debut of something called the Liquid Lens camera.

“The liquid lens uses the principle of human eye bionics, forming a lens-like structure with a transparent fluid wrapped in film, very different from traditional optical lenses,” says the Xiaomi press release. “The radius of curvature of the spherical surface can be accurately changed thanks to a high-precision motor based on Xiaomi’s self-developed technology, which allows for 3X optical zoom, up to 30X telephoto, and a minimum focus distance of 3cm. One lens virtually covers functions of two lenses.”

So there you go. All this cutting edge shininess is yours for as little as RMB 10,000, which is around $1,500. Only Chinese pricing was offered, indicating that’s the only place you can get the Mi Mix Fold for now. Xiaomi launched the flagship Mi 11i yesterday at half the price of this bad boy and good reasons to pay such a premium for a foldy phone continue to elude us. Nonetheless here are the specs.