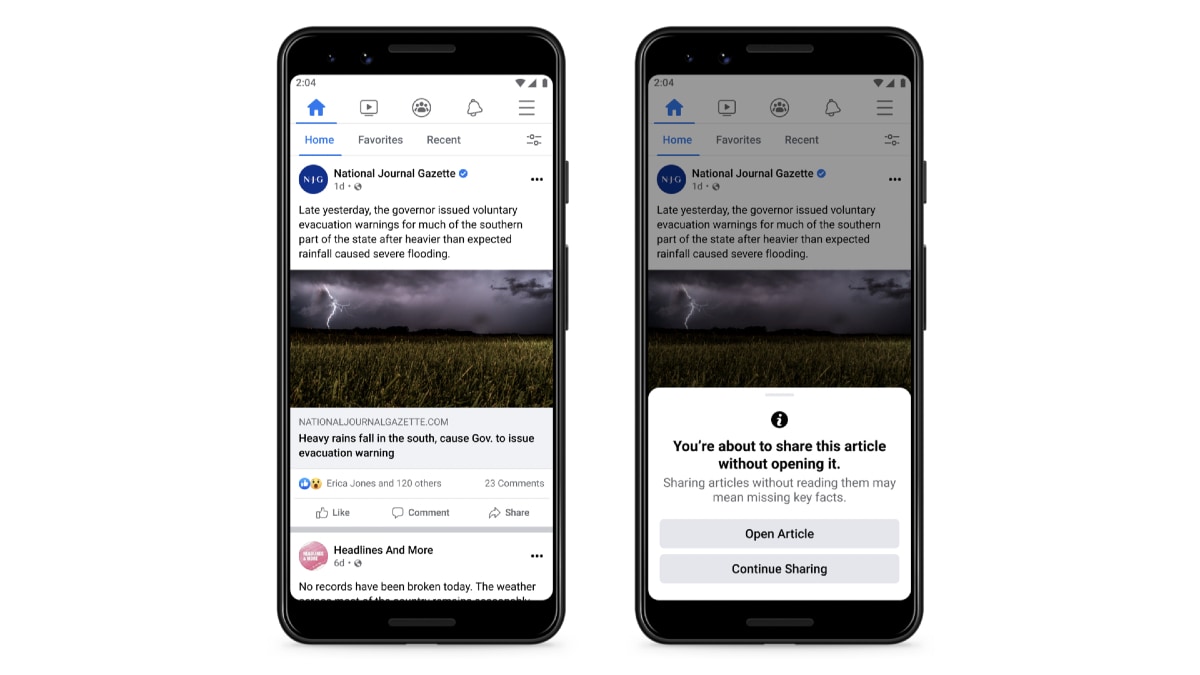 Facebook is looking to start showing prompts to users who share links to news stories and articles without reading them. This new prompt is the social platform’s efforts to curb the spread of misinformation on Facebook. The company has suffered several controversies around fake news and spread of misinformation in the past years. It has now taken several steps to point users towards authentic information, especially during elections and the ongoing pandemic. This new prompt looks to be an addition to these measures, enabling users to share more informed information, rather than just going by the headline which can often be misleading.

The social media giant tweeted the announcement via Facebook Newsroom’s Twitter handle on Monday. This feature is in testing mode and not all users will be able to see it immediately. For those who get it, if they go to share a news article link that they haven’t opened, Facebook will show a prompt encouraging them to open it and read it first, before sharing it with others. Facebook says that it looks to promote more informed sharing of news articles with this prompt.

If Facebook recognises that a user is sharing a link without opening it, a prompt will show up at the bottom of the window with a message that reads, “You’re about to share this article without opening it.” Facebook cautions that sharing articles without reading them may mean missing key facts. It offers two options for users to choose from — Open Article or Continue Sharing.

While this is a thoughtful step forward to more conscious sharing, Facebook still has a long drawn battle against spread of fake news on the platform. Just last month, Facebook and Twitter removed about 100 posts and URLs after the government asked them to remove content that was critical of the handling of the current medical crisis or spreading fake news around the pandemic.

Tasneem Akolawala is a Senior Reporter for Gadgets 360. Her reporting expertise encompasses smartphones, wearables, apps, social media, and the overall tech industry. She reports out of Mumbai, and also writes about the ups and downs in the Indian telecom sector. Tasneem can be reached on Twitter at @MuteRiot, and leads, tips, and releases can be sent to tasneema@ndtv.com.
More