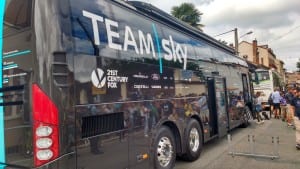 The beginning of summer brings with it the start of a major international football tournament and that can mean only one thing: a telco-backed survey on the TV viewing habits of UK fans.

This year it was the turn of MVNO Sky Mobile, which published the results of some fairly straightforward research carried out earlier this month, alongside a promotional offer that will see its mobile customers pick up free data when the home nations score a goal in the (Covid-delayed) Euro 2020 competition that kicks off this evening.

It’s a tried and tested approach. Both have been done before, in the UK and further afield, from telecoms operators and indeed all sorts of companies with reasonable-sized marketing budgets, whether or not they are in any way linked to the game. It provides some positive attention for the company in question, and it’s a bit of fun.

In Sky Mobile’s case though, it’s a little more shrewd than that. As a fairly small player in the UK mobile market, Sky needs all the help it can get to sign up new customers, so there’s a benefit there. But more than that, the service provider is reinforcing its parent company’s intrinsic link to the provision of top-end live sports in the UK, at a time when it is facing growing competition from the likes of BT and Amazon.

Highlighting Sky’s relationship with football is a smart move, especially when you consider that all the Euro 2020 games will also be broadcast for free on terrestrial television. As such, the satellite provider is unlikely to attract new customers to its TV offerings as a result of the tournament, but it is reminding the market that football is its thing. Meanwhile, it could grab a few price-sensitive mobile customers in the process.

Having arguably over-analysed the firm’s motives, it’s worth having a quick look at its announcement.

Apparently, about a sixth of UK sports fans will take annual leave, skip work or extricate themselves from a family dinner during the tournament, which will take place over the next month, to avoid missing anything. Sky Mobile’s data comes from a survey carried out by OnePoll, which questioned 2,000 adult sports fans via an online poll between 3 June and 6 June. It’s clearly not sophisticated data, but its diverting reading.

At a broader level, the survey showed that 37% of Brits watch their favourite sports on their smartphones at work, which is presumably a lot easier now so many more people are working from home, while 27% view on the toilet and 26% in a restaurant.

However, Sky Mobile also noted that one in five said they have often missed a key sporting event due to not having enough data, with 49% looking over the shoulder of friends and family with bigger data allowances.

Hence Sky Mobile’s not particularly original but likely quite effective promotion: it will give registered customers 1 GB of data for free every time one of the home nations scores a goal; in the context of this tournament, that’s England, Scotland and Wales.

It’s a plan that has found favour with former England goalkeeper Dave Seaman, who is Sky Mobile’s ambassador of choice for this campaign.

“The Euros holds a special place in my heart, and I’ll never forget the save that sent England into the semi-finals in ’96,” Sky quoted him as saying. “As a spectator this time round, I know I’ll be glued to my phone and what better way to celebrate a goal than with a free data boost thanks to Sky Mobile!”

It would probably be churlish to suggest that a bit of glue might not have gone amiss during the 2002 World Cup when England crashed out after that famous Ronaldinho lob, so we won’t go there.

Instead, suffice it to say that if you hear sudden strange noises coming from your bathroom over the next few weeks, there is likely a member of your household in there celebrating yet another (we can but hope) free GB of data. It’s definitely not about needing more fibre.