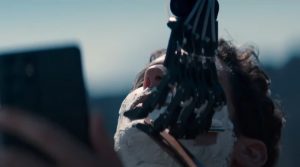 BTEE had one of those strategic, news-light briefing sessions today, in which it was stressed that OpenRAN is far down its priority list.

The virtual event kicked off at 8am with one of those Kevin Bacon ads – specifically the one in which 5G enables remote shaving. It’s hilarious to see the 5G wireless robotics thing still doing the rounds after all this time and the fact that it is would seem to illustrate the difficulty faced by operator marketing departments in demonstrating why anyone should care about the latest generation of cellular tech.

We then got a presentation that consisted largely of BTEE insisting its network is loads better than everyone else’s and will only get more so. Why we had to be dragged out of bed at such an ungodly hour for this piece of live advertising, without any identifiable pieces of news, wasn’t immediately obvious. There was a sense that the event had been in in the diary for some time and needed to be fulfilled with whatever material was available.

The substance, such as it was, of the announcements was talk of a fully converged network. BTEE is, of course, the owner of much of the country’s fixed infrastructure as well as one of its four mobile networks, so this was a reiteration of what a great position that puts it in. Talk of Openreach autonomy was swept under the carpet in service to a vague narrative around ‘integrated’ and ‘converged’ fixed and mobile networks, a process that will apparently be complete by 2025. 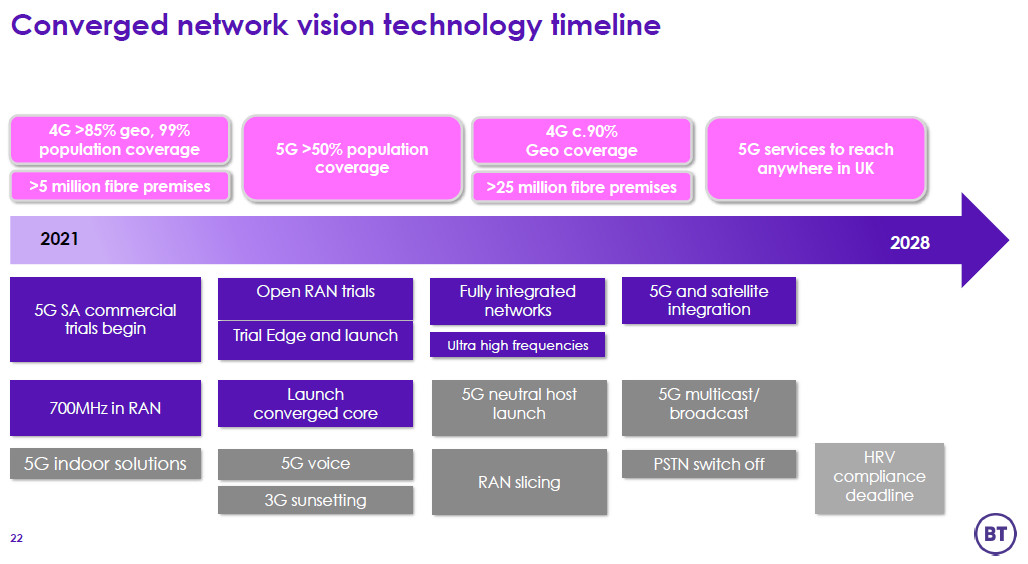 “We’re making a uniquely ambitious, long-term commitment to drive high performance 5G further and faster, and to integrate it at the core with our fibre network for a seamless customer experience,” said BT Group Chief Exec Philip Jansen in the accompanying press release. “Openreach was first to fibre, EE was first to 5G and together BT will be first to a fully converged future.”

Almost inevitably these days, a politician crept out of the woodwork when there was some telecoms activity to be appropriated. “Fast and reliable digital connectivity is crucial to our plan to build back better so I warmly welcome BT intensifying its plans to boost rural mobile coverage and speed up the roll out of revolutionary 5G,” said Digital Infrastructure Minister Matt Warman.

“BT’s vision for a cutting-edge network of combined fixed and wireless infrastructure, alongside the eventual phasing out of legacy 3G services, will help to diversify our telecoms market and safely deliver the amazing benefits of future internet-connected technologies for people and businesses.”

Paolo Pescatore, Analyst at PP Foresight, reckons external events may have prompted the event. “BT is going on the charm offensive in the wake of O2 and Virgin Media coming together,” he said. The move created another UK operator group that owns both fixed and mobile assets, so BTEE probably felt it was time to remind everyone who wears the trousers. “A long and painful road awaits O2 and Virgin Media integrating their cable and mobile networks,” added Pescatore.

There was, at least, an extensive Q&A session afterwards, in which Telecoms.com asked why there was so little mention of the network technology du jour that is OpenRAN. We were told that BTEE is in no hurry to rush into OpenRAN, especially since it’s still in the process of swapping out its Huawei kit and it also has an extra burden of reliability thanks to its emergency services contract. The impression was that BTEE doesn’t think OpenRAN will be a significant live technology until the end of this decade.

“I think there will be a lot of 5G OpenRAN stuff and it will phase into the next generation of networks and actually touch the network in other places,” said BT Chief Architect McRae in a subsequent interview. “We are 100 percent bought into the direction and the outcomes for OpenRAN but we have other things we need to do and we are looking at use cases where it works for us.”

That all makes sense and it’s good to see not all operators are blindly stampeding towards OpenRAN just because the US has a thing for it at the moment. Having said that, there was the standard talk of all the great innovation this converged network will make possible, but little sign of what form that will take. We heard BT expects its 5G network to reach 90% of the country by 2028, so getting it done in time for 6G could be a close shave.