Omdia was first out of the blocks among the smartphone market trackers this quarter, maybe for the first time, so we’ll use its data and canned quote. This means the year-on-year changes need to be taken with a pinch of salt as we’re comparing Omdia numbers from those of a different firm a year ago. All of them are essentially making educated guesses, so there will always be variation between them.

Seasonally, Q2 global smartphone shipment numbers are usually a bit higher than Q1, so the fact they’re sequentially down 12% is noteworthy. It’s probably due to some combination of Covid strangeness and the chip drought, but Chinese vendors seem to have dealt with the situation better, perhaps because the country seems to be less locked down than the rest of the world. Xiaomi especially seems to be on a tear at the moment.

“Despite the spread of the Corona Delta variant and the component shortages, smartphone shipments grew year-on-year in the second quarter,” said Jusy Hong of Omdia. “However, 3Q shipments are expected to turn to negative growth compared to the previous year due to continued supply shortage and reduced demand.”

Huawei’s precipitous decline continues for well-documented reasons, such that even Realme and Motorola shifted more units in Q2. For the time being we’ll stick with the established top six in the table below, however, if only to track how the mighty have fallen. 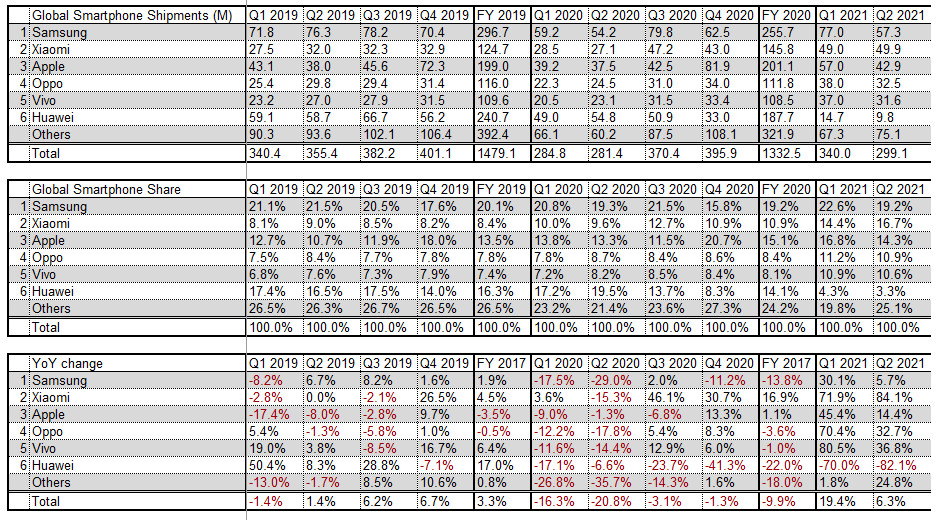