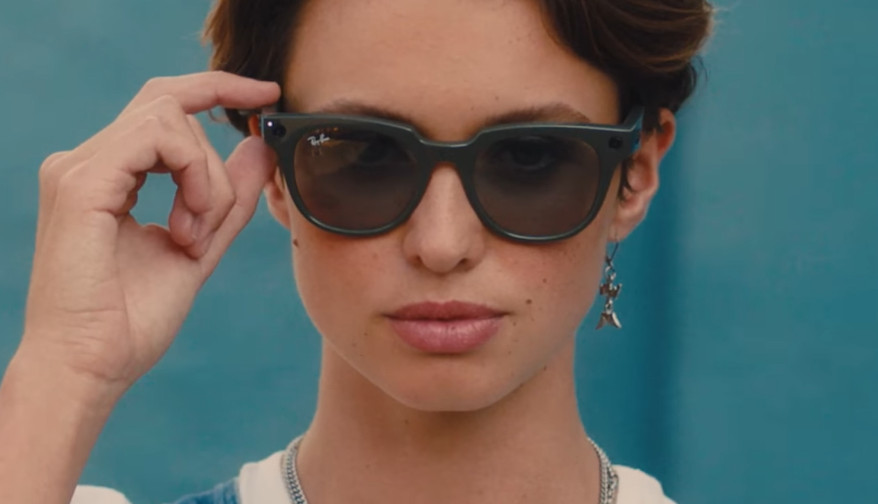 Internet giant Facebook has teamed up with Ray-Ban to launch a pair of shades that not only hide your eyes but enable you to surreptitiously record video.

Clumsily named Ray-Ban Stories, these smart glasses have a pair of 5MP cameras that, presumably, are there to help people tell ‘stories’. “You can easily record the world as you see it, taking photos and up to 30-second videos using the capture button or hands-free with Facebook Assistant voice commands,” says the press release. “A hard-wired capture LED lights up to let people nearby know when you’re taking a photo or video. Streamlined, open-ear speakers are built in, and Ray-Ban Stories’ three-microphone audio array delivers richer voice and sound transmission for calls and videos.”

These look like such cool, normal sunglasses, no one has any idea they have cameras.

Plus, the LED is about the size of a poppy seed. https://t.co/RWkA9MOmAl pic.twitter.com/M8lIndcelR

Facebook is making camera glasses. They have an LED warning light so that bystanders know you are taking a video.

I taped it over.

A FB exec told me this is a violation of the terms of service of the glasses (oops) https://t.co/l6JQy12vzE

In other words, be very careful what you say or do in front of a person wearing a pair of Ray-Bans from now on. The rest of the press release is mainly just self-congratulatory drivel about what a great job they did designing these shades just five years after competitor Snapchat managed it. It has a whole section on privacy protections, but the little light is the only protection third parties get.

This launch is just the start of Facebook’s ambitions for a thing it calls ‘the metaverse’, in which the lines between the digital and the actual world are increasingly blurred. Eventually these shades will have some kind of augmented reality heads-up display, enabling you to improve your everyday experience by superimposing a bunch of digital noise over the top of it. If some of the initial reactions are anything to go by, Facebook has some serious cultural resistance to overcome before this sort of thing becomes mainstream. And they cost 300 bucks.

I am shocked, absolutely shocked that such a privacy-respecting company culture like Facebook’s would produce a wearable camera product that feels like an almost dystopian-creepy invasion of privacy. https://t.co/Izb15F6loe

Remember that whole thing where Google Street View cars were passively scraping everyone’s wifi information? Imagine that but Facebook with all of our faces and locations https://t.co/B1kLdM9HpD

Facebook sent reporters covering their glasses launch a list of supposed “third-party” privacy and consumer groups that it consulted for the product. So I did some digging.

FB funds at least 4 of the 5 groups. Future of Privacy Forum is one.https://t.co/SiK0mGd7P5